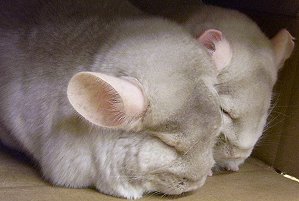 Chinchillas live in herds of as many as 100 or more in their wild habitat. That sounds great and things should be real simple in having chins live in pairs or small groups, right?

Well, with a domestic chinchilla, things are not that simple.  First, I want to say that I believe most chins are happier living with another chin, but that does not necessarily mean in the same cage. They could end up being in separate cages that are side by side so they can see each other and talk to each other. There are a few chins that just will not get along with any other chins. As cute as these little furballs are, they are also very territorial. They can be vicious and will tear each other apart if they don't want to accept another chin. You should never just put two unfamiliar chins together in a cage, or they will fight and have been known to kill each other. Not all chins will fight and what can be worse is if one chin is much stronger and attacks a submissive chin causing critical or fatal wounds.

Since man has put chinchillas through so many changes, including confining them to small cages, for some, living in pairs or small groups is something they are no longer comfortable with. Please be aware of this if you are getting your first chin or are trying to pair a chin that you already live with. If this is your first chin and you think there may be any chance you will want another one down the road, get a bonded pair from the start. It will make things much easier for you and if the chins are already bonded they will be happy to stay together.

If you have a single chin and are thinking of getting him/her a cage buddy then you need to be prepared for the process of pairing them. This takes time, sometimes weeks, so don't expect it to happen overnight. There is also a big commitment on your part as the guardian. If chins are very young you have a good chance of getting them together. I have also gotten together many pairs that were adults, but personality has a lot to do with pairing. Males are usually easier to get together than females. Females are more territorial, males are more dominant. Over the years, people have used different methods to try to get chins together. The method that I always use and have had great success with is the cage side by side method. I have gotten together many pairs by doing this. Since I do not promote breeding, I will advise you to do same sex pairing only, unless you have a neutered male. I do not recommend spaying a female and I do not recommend neutering a male just to pair him with a female.

If you currently have a chin, you will need a second cage for the new chin. It does not have to be huge, but large enough to be comfortable for the new chin to live a couple of months if that is how long it takes to pair them. You will need to quarantine your new chin for 2-4 weeks until you are sure there are no health issues. This also gives the new chin time to adjust to his/her new home with you and get to know and trust you. Quarantine is very important, especially if you get your chin from a pet store or breeder. The new chin does not need to be isolated, but should be kept in a separate room from your current chin. You should bring the new chin in for a complete physical with an experienced chin vet, but still have a quarantine period.

After the quarantine period, you want to start the introduction by keeping the cages about 1" - 2" apart. You want them just far enough so that if paws are outstretched no fingers will be bitten. I let the chins live next to each other for about a week and see how their behavior is. If there are any signs of aggression; yanking on the cage with their teeth, growling, aggressive pacing back and forth, you want to give them time to settle in to living next to each other. You can also switch the chins to each other's cage every couple of days. That way they can adjust to each other's scent more quickly. When they seem comfortable with each other they will either ignore each other or sit near each other on parallel shelves. Most chins are not bothered at all by living next to another chin and are very curious as to who their new neighbor is.

You will need an area that is neutral to both chins, meaning an area that neither chin has been in before. That is where you will do their first introduction face to face without the separation of the cage. Put each chin in this neutral area and never leave them alone. You must be right there in case a fight should break out. If they charge at each other you must put each one back in their own cage and give them a couple of days before trying it again. You don't want their last encounter to be a negative one, so that is why if the first meeting does not go well, you want to give them a little time. If, however, they run around and avoid each other or even get close enough to sniff each other and then run away, things are going well.

A lot of the reaction from both of them will depend on their personalities. As long as there is no fur flying (literally) or charging to attack each other, things are going in the right direction. You may even see some tail wagging. Yes, chins wag their tails when they are happy or excited. This can occur for both male and females. For their first encounter only have them out together for no longer than 15 minutes. If they seem to be getting along in the beginning and then getting a little edgy before the 15 minutes is up, don't wait; put them back in their cages before things go bad. Once you have started the process of pairing chins and things are going well, you want to stay committed to it. You want to have the chins spend some time together in the neutral area every day. Consistency is important. You want to add about five minutes to their play time together every day, so basically they need to be getting along well for at least thirty minutes to an hour. You need to make time in your schedule for these play times since you cannot leave them alone. A way to help them accept each other is to put an open dust bath (a clean unused baking pan, 9x13 works well) in the area where they play. That way they will hide their scent with the dust for a brief time, and it will give them a chance to get to know each other. Plus, they very often will roll around in the bath together. Place some toys or chew sticks in the play area to keep them busy. I also put a small amount of hay in the play area to give them something to do and see how they react with sharing with another chin.

When the chins are basically ignoring each other or greeting each other and then go about playing, that is real progress. When they pass each other with no aggression for at least a week maybe two, then you want to consider putting them in a cage together. If it is at all possible, starting off with a new cage for them is the best thing to do because it will not be either chin's territory and will have no scent in it. If this is not possible and you use a cage you currently have, you should completely clean the cage to try to rid it of the current chin's scent. Scrubbing the cage and disinfecting it with white vinegar is best. I recommend getting all new things for inside the cage: new house, ledges, toys, etc. If you must use what you currently have, then you must thoroughly clean those items too.

Very Important: You must supervise the chins for at least a couple of days when you try to put them together in a cage. Some chins, even after getting along great in a play area, will fight when put in a cage together. That is why having a large cage and a couple of hiding spots (house, tubes, etc) are so important in case a chin gets nervous and needs to hide. Clear your calendar when you are ready to put them in a cage together. Usually when they snuggle and eat together a friendship is formed for life, but you want them to live together happily for several days before you can relax that they will be ok.

If you try to get them together and they never accept each other, do not ever put them in a cage together and don't continue to stress them out by forcing them to play together. You will have to accept that they will need to live separately in their own cages.

Squish or Smoosh Method There is a method of getting chins together called the 'Squish or Smoosh Method' which was created by chinchilla ranchers many years ago. For a while, it was promoted by many breeders as a way to get chins together. I know of people who unfortunately still do this. PLEASE do not ever use this method to try to pair your chins. It is inhumane, cruel and very dangerous for the chins! It is often unsuccessful and in the rare case chins do pair, they often do not stay happy. It is often only temporary before fighting begins when they are forced to live together. The idea is to put two strange chinchillas together into a very small space, usually a very small carrier or cage so they can not move.This is to try to force them into liking each other. Dangerous items like Vicks Vapor Rub was put by the chins nose to disguise the other chins scent so they would hopefully not attack each other. Many switched to using vanilla extract which is still unsafe and not natural for a chin. Seeing how chins wipe their nose, mouth and eyes with their paws, this is very harmful for them. This method is very stressful for a chin and fighting has occured during the process with the chins having no where to go to hide or protect themselves. The method is barbaric and should never be used. I have heard many stories and rescued chins that this has been tried. They have been injured and torn apart literally with deep torn wounds, half ears gone and one chin had half his nose bit off!! If you want your chin to have a companion, take the time and effort to go about it the right way. If things don't work out, then accept your chin wants to live alone. That does not mean you can't have a second chin living next to him/her in another cage. I am over hearing about people being told chins will die if they live alone. That is not true. If you spend time with your chinchilla, have them in a good size cage with toys, proper nutrition and play time with you, they will be happy. Not all chins want to live with another chin. These animals are sensitive, caring and loving creatures who DO have feelings. They are very smart and more than capable of thinking for themselves and knowing what they want and don't want. Please respect that and what is best and safest for them.